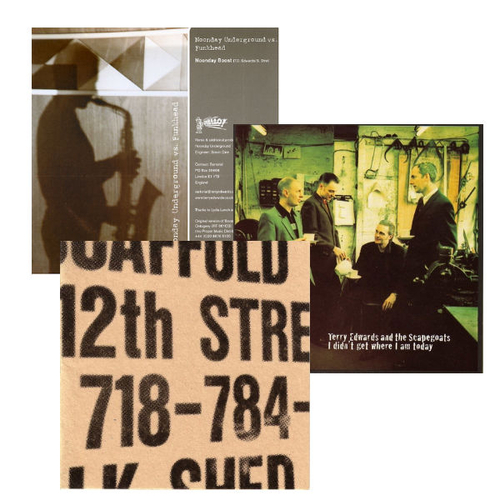 6-8-1 (The Burn-Up) was recorded at a John Peel live session at the Royal Festival Hall just after the turn of the Millenium. It features regular Edwards sidesmen The Scapegoats, bassist Jem Moore and Madness drummer Woody Woodgate.

Noonday Boost is a remix of Boost!!, a track that was originally available on the Terry Edwards compilation album Ontogeny (no fish is too weird for her aquarium, vol.II). The remix artist, Noonday Underground (aka Simon Dine), works with Paul Weller, Kevin Rowland & Candie Payne amongst many others.

In 1988 Mark Bedford and Terry Edwards got together to record some instrumentals which would have been out of place in their previous bands (Madness and The Higsons respectively). The demos caught the ear of a record company mogul who put them in a semi-posh studio in north London and duly released a limited run of the results.

This fully remastered version of the original album also contains the unreleased out-take Itch, the 'dry' mix of Anita Said Goodbye, a new edit of Our Lady of the Laundromat alongside Watermelon Man (extended version) and Rag, both of which were previously only released on 12" vinyl. For collectors there is a 9-track ltd edition available on 10" vinyl (FIT 008LPX).


TERRY EDWARDS, THE SCAPEGOATS - I DIDN'T GET WHERE I AM TODAY

Wiiija Records, mightily impressed by the early Scapegoats recordings and Edwards’ cover versions, signed the band for their seminal splatter album I didn’t Get Where I Am Today. The single Boots Off!! paved the way for it then, and has been reissued prior to this as a split single with The Cure-Ator's version of In Between Days.

Released on vinyl & CD as a 12-track album in 1997, it has been remastered and comes complete with the other releases licensed to Wiiija, including the Harlem Nocturne EP. Ironically, the most sought after track in the collection - due to it being omitted from the original LP - is Stop Trying To Sell Me Back My Past, a song commenting on the plethora of Edwards’ contemporaries plundering rock’s back catalogue and presenting it as their own. Kind of like the Elgin Marbles...

Gallon Drunk mastermind James Johnston played harmonica on the cover of Iggy Pop’s Dog Food, and other notable performances come from trumpeters Jason McDermid and Jon Scott, plus Edwards’ long-time collaborator from Madness, Mark Bedford who penned the opening track, The King Of The Cheap Thing.

Saxophone legend Archie Shepp commented on Edwards’ version of Harlem Nocturne when the band played with him at the Jazz Cafe - “You’ve got a nice, warm tone. Reminded me of Earl Bostic.” High praise indeed. For completists there is the full-length version of Blue Funk, the flip-side of the Boots Off!! twelve-inch which has become a floor-filler once more.

“A killer cut... It will roast your shoe soles clean off" Losing Today (web review)